Inspired by Goffman – the secret handshake

You are visiting another university and have arranged to meet someone from that university in the lobby of the hotel you are staying at. The hotel lobby is busy with many people and (for some strange reason) neither you nor the person you are supposed to meet have recognizable pictures on their webpages. How will you find each other? What is the mechanism behind it? How is this possible at all?

I am continuing with my game theory inspired by Goffman’s work. This is an excerpt of what Goffman says about this on page 95, Part Three “Focused Interaction”, Chapter 6 “Face Engagements” in his “Behavior in Public places”:

“As these various examples suggest, mutual glances ordinarily must be withheld if an encounter is to be avoided, for eye contact opens one up for face engagement. I would like to add, finally, that there is a relationship between the use of eye-to-eye glances as a means of communicating a request for initiation of an encounter, and other communication practices. The more clearly individuals are obliged to refrain from staring directly at others, the more effectively will they be able to attach special significance to a stare, in this case, a request for an encounter. The rule of civil inattention thus makes possible, and “fits” with, the clearance function given to looks into others’ eyes. The rule similarly makes possible the giving of a special function to “prolonged” holding of a stranger’s glance, as when unacquainted persons who had arranged to meet each other manage to discover one another in this way.”

This is wonderful stuff. I am here just going to explain in game theoretic terms what is going on in the background of the last sentence of the quote. So we have two people who would like to meet. But there are many other people there as well, who we cannot ex-ante distinguish from the person we would like to meet. So how should we model this? I would like to model this as a one-at-a-time two person game of two people potentially trying to engage with each other. I would say that there are two types of individuals, type A who would like to meet another type A and type B who would like to be left in peace. This is private information. Only I know whether I am type A (trying to find another type A) or type B (hoping to be left in peace). This means we have a game of incomplete information. So there are two players and each one could be of type A or type B. To close the model informationally, so that we can work with it, it makes sense here to assume that both players of all types have common knowledge of the likelihood of anyone being of type A, let’s say of

, and type B, then obviously

. This is, of course, an empirically completely implausible assumption, but you will see that it actually does not play a huge role. In fact we will find an equilibrium of this game that will be an equilibrium for any positive (and relatively small)

. The game has a first stage, which I will describe in a bit. Let me first describe the second (and last) stage. Eventually both players can unilaterally choose to verbally engage with the other player. So let us give both players two strategies each: engage (E) and not engage (N). So we have players (each of possibly different types) and we have strategies for each player. All that is left is to specify their payoffs. Well, what do we want? We want that B types do not want to engage. So let’s give B types a zero payoff whenever they choose E and let’s give B types a payoff of one if they choose N. Note that this gives B types a (strictly) dominant action of choosing N (not to engage). 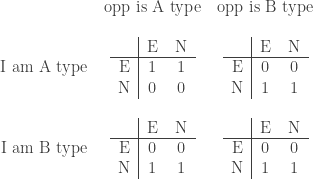 If this is the game and there is nothing else, and if

, then there is a unique equilibrium in this game in which both A and B types choose not to engage. B types do this because they find not to engage a dominant strategy (maybe they don’t even think about the possibility of engaging anyone) and the (in equilibrium sad) A types do this because it is (sufficiently) more likely that their opponent is a B type so that they are too worried about being embarrassed if they try to engage them.

So this is all very sad. But luckily the game people actually play is not fully described yet. We have not taken into account Goffman’s statement about the “special function to “prolonged” holding of a stranger’s glance”. Before the two players decide whether or not to engage verbally, they can first both send a (not very costly) “message” to their opponent by holding a prolonged stare. Now Goffman in his book in the pages leading up to the quote I provided above discusses at length why prolonged stares are typically not used by people as these are considered rude. You can read this for yourself. Whatever the reason, it seems a fact that people do not ordinarily treat other people to a prolonged stare. This means, that we can choose to deliberately employ this otherwise almost never used “message” in special encounters. This “message” can then act as a secret handshake. By the way I first encountered this secret handshake in a just slightly different context in a 1990 paper by Arthur Robson (Journal of Theoretical Biology 144, 379-396). It supposedly is very similar (but I again think the context is slightly different – actually quite different – one has to be careful to distinguish between cooperation and coordination I think) to the so-called green beard effect allegedly proposed by William Hamilton in 1964 and Richard Dawkins in his popular 1976 “selfish gene” book.

So how does this secret handshake work here and how do we model it? Before the two players play this game as described so far, they can first choose whether or not to send this message of the prolonged stare. So how can this generate new outcomes? Well, the two players can condition their engagement level on whether or not their opponent (and they themselves) employed this prolonged stare. In fact the following behavior is an equilibrium of this game. Every A type first uses a prolonged stare, B types do not. Then an A type decides to engage if and only if their opponent gave them a prolonged stare as well. In this equilibrium everyone is now as happy as they can be. B types get briefly stared at by some A types, but are then not engaged and they of course never engage their opponent themselves, while A types by means of the prolonged stare are able to identify other A types and engage exactly those. This is I think a fair description of how and why indeed two strangers can thus meet in a busy hotel lobby in such a way that disinterested others would not even notice that the two did not know each other before.

One of my PhD students at CICS (Research Center for Social Complexity at the Universidad del Desarrollo in Santiago, Chile) told me the following story. There used to be a bar in Santiago called the Club Amsterdam. You could order a beer, get a beer and then pay. You could also, allegedly, order a beer and at the same time put down a 5000 pesos note on the table and you would get a beer and a small portion of cocaine. No more communication was needed. I am not sure whether this situation should be modelled by the game I provided above – maybe one should have to think about the police here – but the problem seems quite similar and its solution employs a secret handshake as well.

Follow The Game Theory of Everyday Life on WordPress.com